Artistar Jewels is the unmissable date for all the contemporary jewel lovers. Beginning on February the 23rd up until February the 26th 2017, 142 international designers from over 30 different countries will take part in the fourth edition of the project with 400 creations, mostly never seen before. For the first time the event will take place in the prestigious Giureconsulti Palace in Milan during the February Fashion Week with the potronage of Comune di Milano. This edition, that has seen an increase in participations with 40% more artists present against the previous edition of 2016, can count well-renowned names and will host the amazing creations of Gillo Dorfles for San Lorenzo, GianCarlo Montebello and Philip Sajet.

Artistar Jewels is the event founded in 2012 by the designer Enzo Carbone and is now a benchmark in the contemporary jewelry scenario. An international showcase for well-known artists and springboard for emerging creative talents. The participants present their works, unique pieces or small series, selected for the high artistic value, for the technical sperimentation and the stylistic research. Evocative body ornaments, very different for the materials and the techniques but linked by the fil rouge of the narration of a story, always present in each creation. Artistar Jewels is a project born with the aim of spreading the culture of contemporary jewelry and designed to anticipate the market trends, one of the first italian realities which has exploited all the potentiality of the web to implement the commercialization of contemporary jewelry.

It’s the only contest in Italy, and one of the few in the world, that offers a never given before and across-the-board reading on the latest evolution of contemporay jewels and offer all the selected participants the extraordinary possiblity of taking part in a prestigious show, collaborating with experts in the sectors, taking part in a contest, selling the creations through the online shop platform www.artistarjewels.com and seeing the works in a publication distributed on the international scale.

Even for this edition the participants will see published in the volume Artistar Jewels 2017 the photos of the shooting organized by Artistar that for this edition will be curated the photographer Federico Barbieri. The book, edited by the publishing house Logo Fausto Lupetti, will be available on a nationally and internationally level: sold in all the bookstores in Italy and in all the major European capitals, and shipped to over 5,000 operators of the sector. The introductive texts will be written by Eugenia Gadaleta, expert of contemporary jewelry, who, apart from being the Marketing & Communication Manager of Artistar, will curate the special contents of the volume Artistar Jewels 2017 together with Selene Oliva – fashion and jewels freelance journalist.

The jury is made of new personalities: Elisabetta Barracchia – Editor of Vogue Accessory and Creative Director of the Fashion Department of Vanity Fair – Maristella Campi – fashion journalist – Bianca Cappello – historian and critic of jewelry – Gianni De Liguoro – founder and stylis of the De Liguoro brand and also protagonist of a special exhibition in a special area – Guido Solari – founder and owner of the Scuola orafa Ambrosiana of Milan via Savona, 20 – Liza Urla – one of the top jewelry blogger and founder of GEMOLOGUE.

The three winners will have the chance to participate for free in Artistar Jewels 2018 and will be included as special contents in the 2018 book. Other significant news is the chance for one of the participant to collaborate with the bijoux brand De Liguoro. Selected by the founder and juror Giovanni De Liguoro who in the eighties collaborated with the top brands of the fashion Made in Italy, from Trussardi to Alberta Ferretti, the artists will help in the personalization of a maison’s jewels which will then be produced. A idea born to create new synergies and that is the perfect summary between tradition and innovation. To an under 27 designer, Scuola Orafa Ambrosiana of Milan will offer the free participation to the Professional Goldsmithing course to learn all the most important laboratory techniques, with the realization of several goldsmithing jewels designed by the School. Finally, for the very first tim, a selection of the artworks will be hosted by eminent galleries: Spazio Espositivo Adiacenze of Amerigo Mariotti and Daniela Tozzi in Bologna, Creativity Oggetti of Susanna Maffini in Turin and the Concept Store Tiberius in Vienna.

“I’m very proud of the results we achieved in these four years and we’re happy to announce the new edition of Artistar Jewels, improved in the contents and in the collaborations. The contemporary jewelry scenario is growing and we are investing in the scouting activities and in the communication sector and this efforts are giving great results. Artistar is a one-of-kind project that offers visibility at all the levels and business opportunities. Milan is a strategic city – said Enzo Carbone, founder of Artistar – From Artistar we embrace all the market’s needs and we work to give the maximum emphasis on all the sector’s protagonists. The fashion week is a fundamental occasion to present the the most prominent sector’s workers all the international excellences of the contemporary jewelry scenario and will also be one of the few events of that week to be open to public and with free entrance. Spreading the contemporary jewelry culture that goes from art, fashion and design, characterized but a strong narrative power, able to demolished the rules of the traditional jewelry, still not very well known in Italy, is for Artistar not an exclusive luxury but a inclusive obligation.

On Febraury 24th in Palazzo Giureconsulti the winners of the contest will be announced with an invitational event.

ARTISTAR JEWELS PROFILE:
Artistar Jewels is the annual event promoting the contemporary jewel. It serves as an international showcase for famous artists and as a springboard for the emerging designers. Artistar Jewels was founded in 2012 in Milan by the designer Enzo Carbone. By the years the event developed and now it has more than 100 designers participating to each edition. Artistar group, made of artists, architects, journalists and communication professionals, aims at being a benchmark in the contemporary jewelry scenario by promoting designers and artists both in Italy and in the rest of the world through several initiatives. The shop on line www.artistarjewels.com is a virtual window by which easily and simultaneously communicate your creativity and sell your creations. Who visits the website can admire the exhibited jewels, learn the project philosophy behind them and get in touch with the artists. This reality also periodically spreads news about contests, free workshops, events and commercial partnerships. All the participants to the contest are included in the famous volume published by Logo Fausto Lupetti Editore; a book distributed both in Italy and in the European capitals. Artistar Jewels is a large-scale projects directed aimed at showing the pluralism of the contemporary jewel in all it endless variety. Artistar Jewels enhance the contemporary culture of the jewel, able to convey, in each edition, an heritage of beauty and knowledge that leaves the mark. 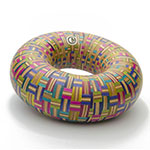 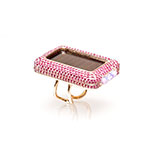 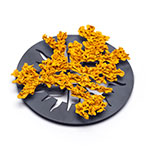 THEY SAY ABOUT US

The past two years of Artistar Jewels meant the world to me. The 2018 edition was the primary reason that I made my brand official. I had been designing and creating for many years but mostly as a student. My confidence in my work wasn’t all that high but when you all took notice, it made me begin to take what I do seriously. It was a huge learning experience: I came home with a new mission to step up my game and I feel like I did just that. My confidence in my art continues to grow thanks to this amazing project.

Describing Artistar Jewels in three words? Audacious, professional and ambitious. Visibility is an important component, especially for those like me who come from "solo" projects. The opportunity to be part of this project and the possibility of being published in a contemporary jewelry book together with other talented artists from all over the world was really exciting and rewarding, especially after much work spent growing and establishing myself as an artist.

The professionalism, genuine care, devotion and distinctive selection of the magniﬁcent diversity of work distinguish Artistar Jewels. It is an honor and privilege to exhibit with them. All of the work in the 2019 edition was extremely fascinating. The quality and diversity of materials, styles and execution of the art was astounding. I look forward to Milano Jewelry Week. Milano is a global center for art and design and a perfect place for this event. The presence of artistar jewels will greatly enhance its stellar success.